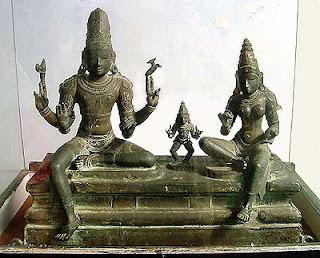 Posted by annamalai at 3:23 AM No comments: THE family Deity was Sri Venkateswara. Sundaram Iyer's elder brother was named after him as Venkateswara Iyer — a fine person who used to offer half of his earnings to the goddess Sahayamba. He became disinterested in worldly affairs even by the time he was eighteen. Saying that he would pay a visit to Tirupparankundram near Madurai he left home for good. He lived as a renunciate at Chidambaram and spent his time cleaning up the pathways surrounding the temple, for the benefit of devotees. The new born was named Venkateswara after the paternal uncle and the family Deity.

One of Sundaram Iyer's paternal uncles was also a renunciate by name Sivananda Yogi, which was why when his father, Nagaswami Iyer passed away before the children came of age, the burden of the family fell on Sundaram Iyer. As a boy of sixteen he took up a job as a clerk on a monthly wage of two rupees. Intelligent, hardworking and popular he quickly learnt how to draft legal documents. He was tactful in his dealings with the officials as well as common people. Even without appearing for any tests he obtained a licence to be a pleader, a facility then available. He quickly established himself and became prosperous. He built a large house which had two portions — one to serve his domestic needs and the other to be a guest house.

Officials who were posted to Tiruchuzhi stayed there until they secured their own accommodation.

Sundaram Iyer knew what hardship was and so his was an open house for the needy. Alagamma never turned away anyone who needed food. She was Goddess Annapoorna herself! The couple became well known for their goodness, generosity and appropriate conduct. In fact both the words Sundaram and Alagu mean the same — beauty!

In the house, regular worship of Siva, Vishnu, Ganesa, Surya and Sakti was carried out. As one of the village elders Sundaram Iyer helped in organizing purana- kalakshepas at the temple and was generally helpful in temple affairs also. He never went about exhibiting his devotion openly, possibly he had a preference for the jnana- marga. He was of a serious temperament and was not quite free with or very close to his wife, brothers or children. Alagamma, on the other hand was quite open about her devotion — she went about reciting the Dakshinamurti stotra and similar Vedantic hymns. She made it a point to learn as many devotional songs as possible and used to go to anybody's house in the village to learn a new song. She got initiated into the sakti-panchakshari japa. She was quite orthodox and performed Surya namaskaras regularly.

Sundaram Iyer's family belonged to the Dravida, Smarta, Brahacharana lineage. They followed the Yajus sakha, Apasthamba sutras. They belonged to the Parasara gotra with Vasista sakti Parasara rishis. Their family name was Tiruchuzhi.

Posted by annamalai at 2:37 AM No comments: