THE child Venkateswara was unique. He seldom spoke or quarrelled. There was a close relative, Meenakshi of his age. He would not suckle his mother's breast if Meenakshi did not also suckle milk; he was so indifferent about his feeding. He had a sweet and gentle smile but behind it was a determined nature.

While admitting him in school in due course, his name was noted as Venkataraman. This name stuck. Lakshmana Iyer a close relative of the family was well- versed in Telugu. He used to address the child as Ramana or on occasion as "Nayana Ramani". "Nayana" in Telugu literally means father but is also used as an expression of endearment. The child adopted the Telugu tradition and addressed his father as Nayana, unlike the rest. In course of time the other members also adopted this mode of addressing. This extended to outsiders as well, all of whom began addressing Sundaram Iyer as "Nayana."

Venkataraman always had his way. One day, Sundaram Iyer set out from his house on business. He placed two pillows in a cart. The child remarked, "Nayana, the first pillow will drop off." The father ignored this and went away. In a little while, the child's prophecy came true. Sundaram Iyer was astonished — how could the boy know beforehand?

In his eighth year Venkataraman had his upanayana.

He learnt to say in the ancient traditional way, "I, Venkateswara Sarma pay obeisance." 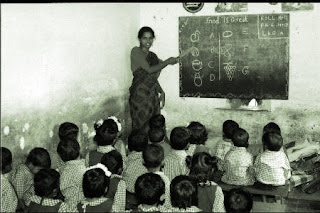 The school in which Venkataraman was admitted was run in a mantapa. The head master was one Madhura Nayagam Pillai. Only Tamil was taught there up to the fifth standard.1 Sundaram Iyer wanted his sons to be educated in English so that they could get into government service. But at Tiruchuzhi nobody taught English.

Sundaram Iyer had two younger brothers — the elder one among them, Subbu Iyer, was a clerk in the Sub- Registrar's office at Dindigul. There was a Hindu School at Dindigul where English was taught. Nagaswami was put in that school. Venkataraman also was sent there in 1891 to join the sixth standard.

The brothers were like Rama and Lakshmana (who had the support of the monkeys). These brothers had the support of a group of young boys! They were friendly and healthy. The elder one was an adept at jumping on the tree branches, and was nicknamed "monkey." The younger one was always a winner and came to be known as one with a golden touch or with a golden hand (thanga-kai) reminding us of one of the several names of Siva, "Hiranyabahu" (Golden armed). The brothers were interested in gymnastics, wrestling and football. The younger one simply followed his brother — he had no particular preferences. If provoked to a fight, he was unsparing which was why even those older than him left him alone. Venkataraman was never afraid of being beaten up either. 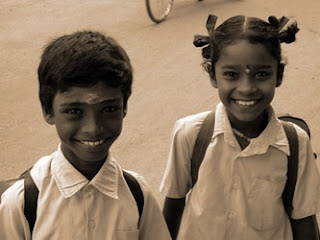 (Photo of children in Tamil Nadu)

Venkataraman was a sound sleeper. At Dindigul, their house was in Abhirami Amman Kovil street. On a birthday of Srinivas, son of Subbu Iyer, after the evening meal was got ready, the rest of the family went to the temple leaving Venkataraman to look after the house. A little later, he bolted the door and fell asleep. The family returned late in the night and knocked at the door but there was no response. They pounded on the door and made a lot of noise which brought forth several neighbours on the scene but all of this was of no avail. Everyone was wondering as to what had happened to Venkataraman. After several attempts they succeeded in opening the door. Thereafter they gathered round Venkataraman and tried various means to wake him up. They wondered at his sound sleep and likened him to the legendary Kumbhakarna. Getting to know about this quality of his, some schoolmates who were earlier beaten up by Venkataraman but were afraid to retaliate, would take him while asleep to a lonely spot, thrash him and bring him back to his bed. By their words and hints on the following day, Venkataraman would guess what had transpired the previous night. As mistaken by some, that movement of Venkataraman during sleep was not due to somnambulism.

Sakti (power) is of two types — one is mental, the other practical. During deep sleep these lie dormant in the body and do not get dissipated as in the waking state. That is the reason why the body becomes energetic as soon as it awakens. Owing to the sadhaka's will sakti does not get wasted externally through the sense organs; it becomes turned inward towards the Self. Deep sleep is involuntary, hence it is a state of ignorance. On the other hand, Samadhi is voluntary and is a state of knowledge. For Ramana, the body was able, through this deep sleep state to sustain a state of tapas [?] in later years.

Neither of the brothers was particularly interested in studies. Maybe, the elder one was a little better. The younger one, on the other hand, remembered that there was such a thing as education only upon seeing the teacher's face! However, he had the faculty of committing to memory anything he heard once. But he took particular care to memorise Tamil poems. He never aspired to become a scholar nor did anyone expect him to become one.

Subbu Iyer was transferred to Madurai in 1891. The brothers also moved with him. They were admitted in the Scott Middle School in the North Avani Street. Their residence was in North Chitrai Street.

1The nomenclature of classes was different during those days.
Posted by annamalai at 1:47 AM